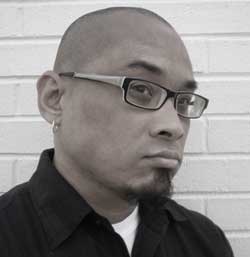 W. Todd Kaneko is not cool enough to be a rock star, not tall enough to be a professional wrestler and not virtuous enough to be a super hero. He is the author of The Dead Wrestler Elegies (Curbside Splendor, 2014). His poems, essays and stories can be seen in Bellingham Review, Los Angeles Review, Boxcar Poetry Review, Barrelhouse, The Collagist, Paper Darts, Menacing Hedge, Blackbird, The Huffington Post, Song of the Owashtanong: Grand Rapids Poetry in the 21st Century, 99 Poems for the 99 Percent, Bring the Noise: The Best Pop Culture Essays from Barrelhouse Magazine and many other journals and anthologies.

He holds degrees from Arizona State University (MFA, Creative Writing) and the University of Washington (BA, English). A recipient of fellowships from Kundiman and the Kenyon Review Writers Workshop, his work has been nominated for Best of the Net and the Pushcart Prize. He is currently an Associate Editor for DMQ Review and an Assistant Professor in the Department of Writing at Grand Valley State University. Originally from Seattle, he now lives in Grand Rapids, Michigan, with the writer Caitlin Horrocks.