Episode #112! Featuring an interview with Nathaniel Osollo, author and illustrator of SHADOW PEOPLE. 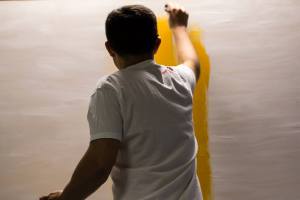 Many years ago, on a distant star, a small boy was born. His home was one of intellectuals, artists, poets, and storytellers. The boy became schooled in the arts. Such faith he held in them that they granted him great power. With the arts he could move worlds and open minds. One day a traveller from the future appeared to the people of the star and proclaimed, “There is no future in art.” Disillusioned and distraught, the society fell apart. Creativity disappeared and was replaced by economics and politics. The boy got a real job. It was laborious and lacked creativity. He did not remember the past – no one could. But no matter how bleak, he had a future. One day the boy, now a man, was fired and everything came back to him. He remembered the arts. He is rebuilding his power and is coming to restore the creative world again.

Links mentioned on the show: